last tuesday rocked my world a bit. i was sitting at a red light, with one car ahead of me. its a long light, as there are several directions of cars going through. but im patient. im on schedule on my way to work. im not playing with my phone, or reaching for anything.

then the totally undesirable happens. my foot slips off the break pedal, and of course hits the gas with force. not a great deal of force, but enough to send me into the car in front of me. BAM!

it was an ‘oh shit!’ moment. it got worse when i got out of my car to see if the other driver was ok. she was, but she was 9 months pregnant. *wanting to sink into the pavement*. thats the kind of stress that unhooks my brain, and the thoughts – with no tracks to follow – get log jammed in the middle of my head and just swirl around aimlessly. so there i am, an otherwise bright woman capable of multitasking under pressure at work all day long, capable of seeing the best path through after only a moment of consideration, just standing there like an idiot. i did know i had to exchange information, but i had trouble finding it, finding a pen, finding paper, writing. i managed, and then as i gave her my info, she said she called 911 because she was so far along and had hit the steering wheel. i understood that, and she didnt seem nearly as rattled as i was. perhaps if i had been the one hit i would have been calmer too. after all the emergency personnel arrived, and she seemed ok, they left and she did not. i was relieved for that.

i got a citation for inattentive driving, which i plan to contest. i also filed my insurance claim, which is going to take care of the car. hers only had a small dent in the rear bumper. mine? the plastic bumper cam off, and had to be put in back seat. i can pick it up with three fingers, its so light. jeez. we get half the $500 deductable with the rental car allowance, since we have two cars. we will have it back by next weekend. 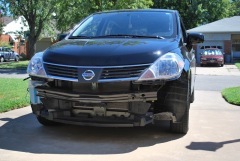 so its not looking so bad at this point …